Deathloop is a first-person shooter, In the single play campaign, you play the role of an assassin named Colt, who is one of the two imprisoned killers. However, the prison has an unusual, original form – it is a time loop on Blackreff Island that forces convicts to repeat over and over the same day. The only hope of breaking the repeating cycle is to find and eliminate eight targets before the day reset arrives.

Each repetition of the loop is an opportunity to gain new experiences. The game gives the player full freedom, and you can use your favourite style – we can try to sneak past enemies to achieve your goal or attack from the front, using all available arsenal and wreaking havoc in the area. We can use both more or less conventional weapons, as well as use supernatural powers with various effects. The key to success is choosing the right combinations thanks to which we will be able to cope really with any situation. 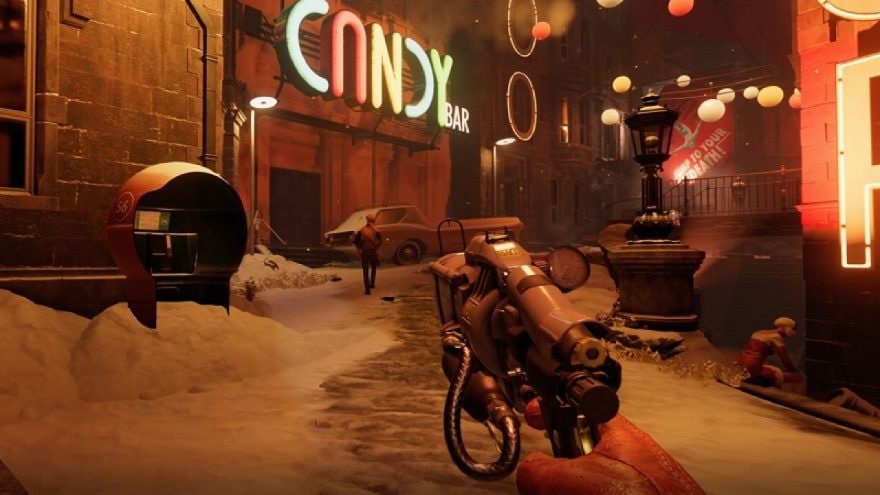 We must not forget that we are in mortal danger, which is the second assassin named Julianna. What’s more, in the Deathloop PC game, the studio offered a very original approach to the multiplayer section – the player can play the role of the villain, i.e. Julianna, sneak into the campaigns of other players and try to prevent the loop from breaking. This is, of course, an optional experience – we can entrust the control of Julianna to artificial intelligence and play among ourselves.

Being defeated is not our end here, on the contrary – an opportunity to try out new tactics and new possibilities. Each subsequent iteration is a chance to find clues, learn the daily schedule of our goals, and an opportunity to acquire new items. Perhaps thanks to this experience we will be able to refine or completely change the strategy that will bring us the final success? If you still can’t do one, well – keep repeating the loop until you succeed.

The Deathloop game will be released on PC- but on PlayStation 5 too. Bethesda and Arkane Studios are known for creating amazing, addictive, and refined in the smallest details worlds that delight the audience and allow for full immersion. It is no different in this case – the game world is a stunning, retro-futuristic island, strongly inspired by the 1960s. The omnipresent decadence can be hard, and the inhabitants, devoid of all moral principles, are rarely helpful. Nothing matters here, except the eternal party, which further strengthens the atmosphere and the atmosphere of evil, corruption, and moral decay.

Solve the riddle and break out of the time-loop!

FPS with reference to the best times of the genre.

An interesting story that will not let you get bored.

Play as a good hero or bad!